THE HERD - Colin reacts to Belichick and Patriots rout Chargers 45-0 - Belichick is still the GOAT?

Or just due dilligence? Bill Belichick's recent accolade puts his dominance, longevity into perspective The accolades just keep racking up.

Harris took a direct snap and ran for seven. Harris then ran for eight before Jakobi Meyers dropped a well-placed throw from Newton.

Harris then picked up 11 for another first down and Newton carried for 14 to get it to the Chargers Harris picked up five on the next two carries then James White caught a pass in the left flat and was dropped after a gain of three.

On fourth-and-2, Newton plowed forward and picked up the first down. A direct snap to Harris gained five. Newton then ran twice to get them in the end zone.

It was an efficient, low-risk, methodical, bullying drive that set the tone for the day. Is Jarrett Stidham going to do that? Could Stidham have dinked and dunked down the field and hit a chunk play here and there through the air?

But you want to bet on that? Newton is safe and productive. Stay in the know. Subscribe to azcentral. The Chargers are also just ATS in their past 20 home games.

If you look at more recent history, things haven't been much better as they're straight-up in their past 12 homes games.

Basically, the Chargers don't have much of a home-field advantage. The Patriots are an underdog in this game, which is notable, because they actually seem to do pretty well as an underdog.

Since the start of the season, the Patriots have gone ATS and straight-up. It was complementary football at its finest, with each unit feeding off the others.

During the Belichick era, the Patriots have made it a habit of double dipping — scoring on their final possession of the first half and opening the second half with another.

Herbert moved the Chargers to the New England 40, where Badgley ran out for yard field goal attempt with three ticks left.

Poor coaching. That amazing blitz pickup by James White on that long completion to Jakobi Meyers. Took Murray head on and allowed Newton the time to get the ball out quick.

They call him MR. INT for a reason. ProBowlVote J. Patriots injury update: TE Ryan Izzo neck is questionable to return. Jackson records his seventh interception of the season on the second pick Herbert has thrown this afternoon.

This a bit more big-picture, but Jackson, and RFA this offseason, will likely see a first-round tender when the time comes. He's evolving into a stud.

Jackson pic. Best throw of the day by Herbert. Guyton beat Jason McCourty and was able to haul in a pass that was coming in hot. 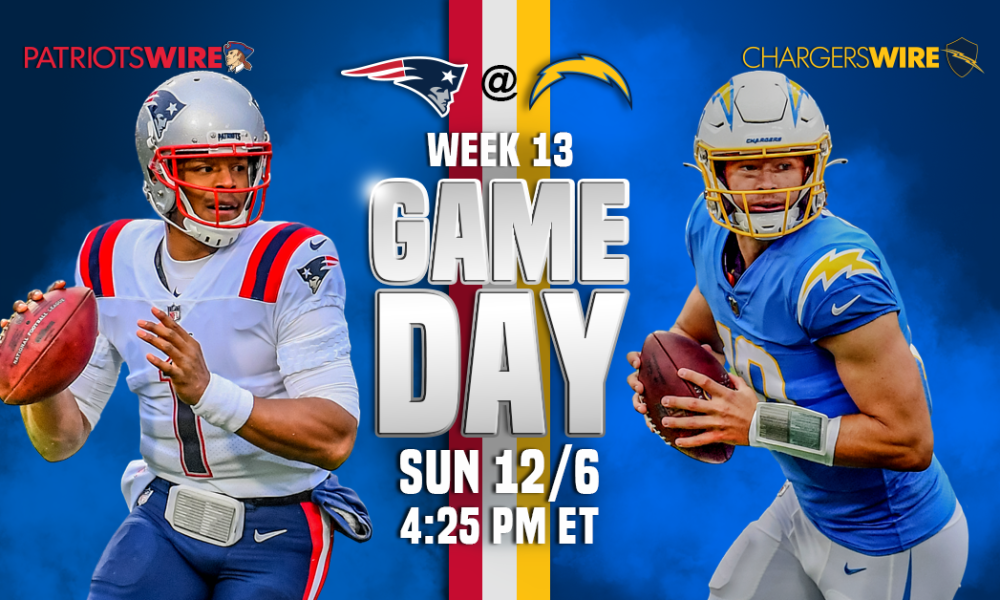